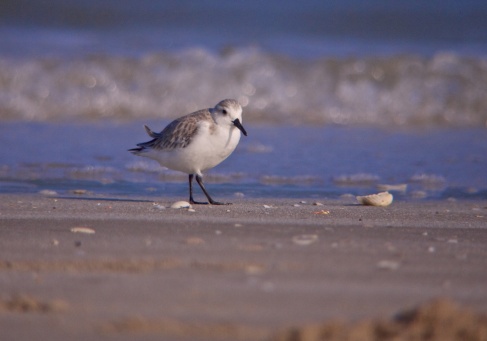 Ban Bang Kao is one of my favourite bits of beach and it is a great place to photograph shorebirds which like sand – in fact I can’t think of an easier place to see Malaysian Plover and Sanderling. In addition to birds it is quite atmospheric with fishing boats usually beached pending tides: today, with the tide coming in,the locals had driven their trucks as close to the boats as possible to expedite the unloading of the catch, which appeared to be exclusively squid. It is an ideal place to bring non-birders and today I was accompanied by my wife and son. 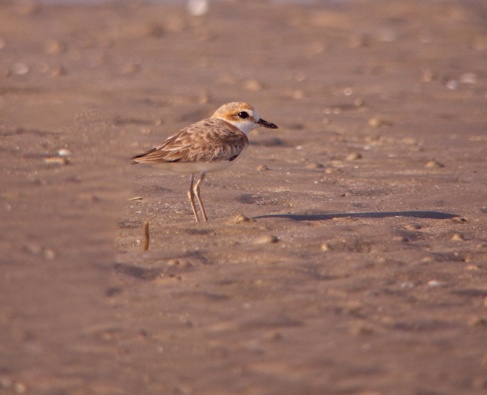 On arrival we were greeted by a Richard’s Pipit, distinguishable by its very loud song. I had a quick scan of the birds on the beach and in among the flock of Brown-headed Gulls there was at least one Little Tern, showing a yellow bill with a black tip and a few Common Terns ( edit: thanks to Dave Sargeant for pointing out my error here: originally I wrote Arctic Tern, which would have been a new bird for the Thai list! Don’t know what happened there!) No Crested Terns. I got in too close and put the gulls up and annoyingly they didn’t return. Sorry guys. Frustrating also because there were first and second year gulls next to each other which would have allowed good comparative shots. 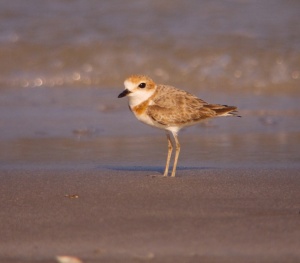 I had a nice time with the Sanderlings and Malaysian Plovers – at least fifteen Sanderling and 5 Malaysian. I think there might be a case for renaming it Sanderling Beach. 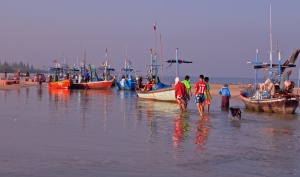 As the afternoon wore on we decided to head to the Kings Project at Laem Pak Bia for dusk in the hope of catching sight of some starlings coming into roost. (Edit: thanks to Dave again for pointing out my error: I originally described these birds as thrushes – !)There were plenty of starlings but sadly only White-vented Mynas. Huge flocks of Brown-headed Gulls in the pools outside the Kings Project. At dusk, hundreds of large fruit bats, Lyle’s Flying Foxes, took to the air from the mangroves and headed inland – a truly wonderful sight.