(Edit: My thanks to Ayuwat Jearwattanakanok for pointing out my very obvious error: originally this was named Ratchet-tailed Treepie, an altogether much rarer species, when in fact I meant Racket-tailed – thanks Tun. ) With four Himalayan Vultures recently in Phetchaburi province I was very hopeful of something interesting during the two nights  of the school camp in a resort, the Thanattichaburi Lake Resort and Spa,  to the east of Kaeng Krachan National Park. In the end no raptors but one unexpected lifer in Racket-tailed Treepie. The long, slim tail with its “distinctive broad, spatulate tip”, ( The Birds of the Bangkok Area, Round) is what enabled me to identify this bird. Otherwise easily mistaken for a Drongo, especially when viewed at a distance. 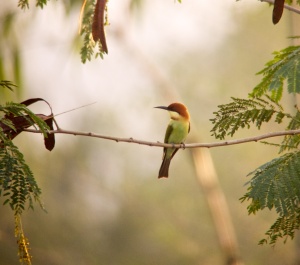 Some Richards Pipits, very erect stance, lots of Olive-backed Sunbirds, a couple of Common Tailorbirds and some Chestnut-headed Bee-eaters – and lots of interesting calls in the dark. A Coppersmith Barbet was noteworthy simply because it was the first seen in over a year. Once a bird I saw very regularly.

Unfortunately my foot is playing up a bit at the moment so limited mobility. Hence little birding.